This article has a name: this is Angel from University of Mondragon in San Sebastin area, and I’m going to tell my story. Well, I won’t be so pretentious: I will tell my experience during last year. I’ve spent a year going to work using the train and the bike instead of my car. There’s been some days when I had no option but to use the car, but there weren’t that many.

I’ve been very happy not using the car, and halfway through this year I’ve come to some conclusions. I’ll leave them here.

So it’s eco-friendly, but how much?

Being an engineer, I must start with numbers. I’m going to use the following data as a starting point, taking always the most benevolent case:

In the ideal case, with the minimum possible pollution, I have saved the atmosphera this:

Those of you who know my car also know that it’s a little bit old: it looks like a used shoe box (but it is very nice!). That’s why I’m going to round numbers up: I surely pollutes more now than when it was new. Let’s analyse the data little by little. So: a ton of CO2, 2 kg of NOx and 2 kg of CO, is it a lot or not?

My opinion: I haven’t saved that much… depending on how you look at it. This is because very often it’s a matter of how much you pollute as well as where you pollute: it’s very dangerous to emite particles in zones where they cannot be absorbed. Half a ton of CO2 is not a lot… unless you set if free inside a city.

Have I saved money doing this? Moving in public transport costs me some 40-50 euros per month. Doing it by car, 60 or 70. Not a big difference.

We have a paradox here: in Gipuzkoa motorways are subsidized but not so much the public transport, and that’s one of the reasons why there’s not a big difference. Only adding insurance, maintenance and some other extras this starts to make sense from a monetary point of view, and still it’s not a big thing.

“At least you’d have saved time!” some might say. No, I don’t manage to save time either… but I do. Let me explain:

So when I take the train I have 35 minutes to do what I like; by car I can listen to music, but I don’t enjoy it so much, so I spend those 20 minutes doing something I don’t like especially.

The most important thing about moving like this is that before I start my working day I have already done something “useful”. I have been reading and I have been cycling, 2 things I really like. Some say I sleep less doing this; I rather think of it as a better use of my time.

On top of that, when I use public transport I’m never late for work. When I use my car, I find it very difficult to let the blankets go… 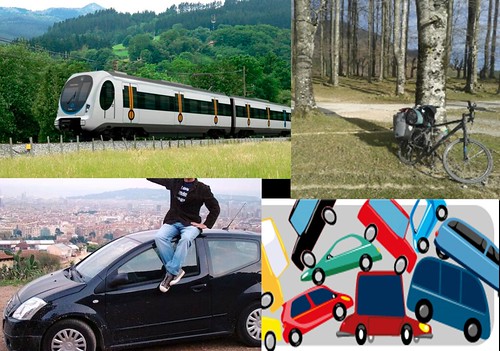